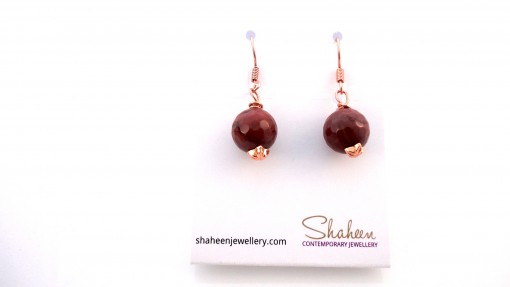 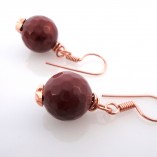 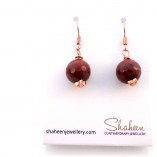 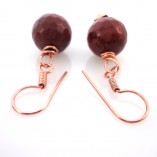 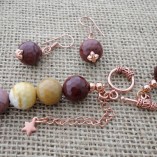 From the land down under – earrings – Australian Mookite, rose gold plated

Mookite is one of Australia’s best known gemstones due to its amazing combination of colour, pattern and hardness. Vivid red, white, yellow and purple shades make Mookaite a highly sort after, world class stone.

The Mookite 12mm faceted rounds are a earthy deep red, which  one of the colours so reflective of the area in Australia that they originate from.The rose gold shepherd hook adds a soft warmth to these earrings. They are comfortable and easy to wear for the office or going out for coffee.

Why not match them up with a matching Mookite necklace.

The Aboriginal term “Mooka” means “running waters” and refers to the numerous springs that feed into the area. You won’t find this gemstone in the high street.

Mookite is an Australian Jasper which is only found in one location, the Kennedy Ranges of Western Australia in outcroppings near Mooka Creek. Mookite is one of Australia’s best known gemstones due to its amazing combination of colour, pattern and hardness. Vivid red, white, yellow and purple shades make Mookaite a highly sort after, world class stone.

From the Early Cretaceous period, around 120 million years, Mookite was formed as the skeletal remains of radiolaria, a microscopic protozoa, were solidified. Additional silica carried in groundwater, along with minerals helped produce its beautiful combinations of bold red, burgundy, mustard-yellow, cream, white, brown, mauve and purple.

These natural gemstones are ethically mined.

A fabulous present especially for anyone from Australia, or as reminder of a great holiday.

An Aboriginal Mother Earth stone, it is gaining in popularity throughout the world for its healing capacity, and for empowering one to feel and connect with the electromagnetic energy currents of the Earth. Mookite is believed to be a a nurturing stone that supports and sustains during times of stress. It brings peace and a feeling of wholeness. Mookite promotes an ageless spirit willing to accept change and seek new experiences, and awakens one’s natural instincts in knowing the right direction to take.